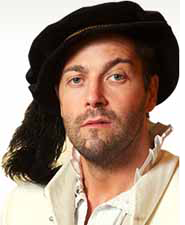 Andre Manson was a fashionable French artist who was in demand across Scotland.

His work allowed the rich and powerful to show off their refined Continental taste.

Manson arrived in Scotland after James V married the French noblewoman Mary of Guise in 1538.

He did a lot of work for the king as well as for the likes of the powerful clergyman Cardinal David Beaton.

But his greatest achievement may have been the Stirling Heads which decorated ceilings in James’ new palace.

The king may never have seen the job completed.

James died in 1542 and Mansioun carved a lion for his tomb.