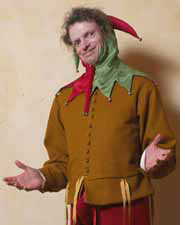 The fool’s job was to bring humour into the royal court.

You can get an idea of what people laughed about from one of the Stirling Heads which shows a jester clutching one of his buttocks and sticking out his tongue.

When Curry, a jester for 11 years in James IV’s court, fell ill, the king paid for his care and later looked after his widow “Daft Anne”.

But there were risks if a joke went wrong.