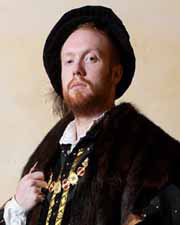 James V wasn’t old enough to walk when he was crowned in the Chapel Royal.

By the time he was old enough to rule in 1528, squabbling noblemen had virtually bankrupted his kingdom.

But James was determined to be a Renaissance prince who could look his European contemporaries in the eye.

He married well – twice – and used the huge dowries to create a vibrant, cosmopolitan royal court.

He and his second wife Mary of Guise constructed the grand palace at Stirling Castle, which was designed to heighten royal mystique.

As a Renaissance man, James was a patron of poets and writers as well as a skilled lute player who could sight read music. However one contemporary dryly noted: "his voice was 'rawky and harsk".

His untimely death in 1542 left his daughter Mary as queen when she was just one week old.