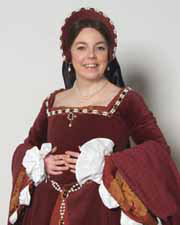 Arriving as part of Marie de Guise’s retinue, she married into the Scottish nobility and later became governess to Mary Queen of Scots. Her role was to manage the daily life of the infant queen.

She also oversaw the royal crèche which cared for the ‘four Marys’; Seaton, Beaton, Livingstone and Fleming.

Mary Fleming was Janet’s own daughter and they eventually accompanied Mary Queen of Scots to France.

Janet would make sure the children were appropriately clothed and were fed from the royal kitchens. She also made sure they behaved and attended to their formative education.

In these times boys often wore skirts until they were ‘breeched’ (given trousers) at around seven.

Janet had to be dressed for anything for instance refereeing a royal football match.

She was also a great beauty, stealing the heart of Henry II at the French court. Her pregnancy with his love child was a major scandal and forced Janet’s return to Scotland.