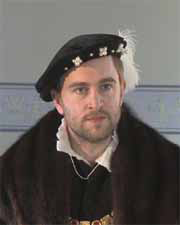 Keeper of Stirling Castle, an expert swordsman and captain of the guard to the two queens.

Erskine was deeply loyal to the Stewart royal line and did all he could to protect the castle.

Aware of the advancements in warfare he would have assimilated gunpowder weaponry with neo-classical tactics on the battlefield.

His loyalty to the royal family was reinforced by the fact that his grandson was half-brother to Mary Queen of Scots.