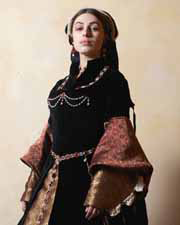 One of the most remarkable women in Scottish history, Marie de Guise was a French noblewoman who was persuaded to marry James V as a political match shortly after the death of her beloved first husband.

When James V died, leaving her with a week old daughter in a hostile foreign land, she could have retired to a life of luxury with her family in France.

Instead she stayed and fought for the rights of Mary Queen of Scots and eventually rose to become Regent of Scotland – ruling the kingdom in her own right.

A Catholic queen defying the Protestant Reformation and the last defender of the Auld Alliance, she was a strong and determined woman in a man’s world.

Marie de Guise, who was noted for her wit and charm, was said to be a night owl and loved playing cards and placing wagers with her courtiers.

It is thought probable that Marie with her Medici family connections brought knickers to Scotland for the first time.

Before her marriage to James V she was approached by his uncle Henry VIII as a prospective bride. She refused and was quoted as saying “I may be big in person but my neck is small.”