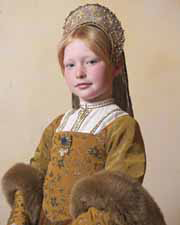 The infant Mary was crowned Queen of Scots in the Chapel Royal in 1543 and Stirling Castle was supposed to be her safe haven in turbulent times.

She became a political pawn as England and France competed for influence over the kingdom.

England’s Henry VIII waged war against Scotland – the Rough Wooing – to force her to marry his son. But Mary wed the son of the French king instead, the first of her three marriages.

Mary staged one of the first firework display in Scotland to celebrate the baptism of her son, the future James VI.

She also enjoyed football, watching a match among her courtiers played at Carlisle.

In 1567, the Catholic queen was forced to abdicate by Protestant noblemen.

Twenty years later she was dead, beheaded after a long imprisonment in England having fled Scotland to seek the protection of her cousin Queen Elizabeth.