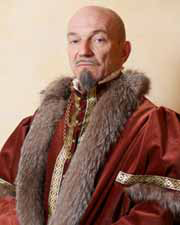 James Hamilton, the 2nd Earl of Arran, was a political animal who was highly adept at double-dealing for personal gain.

Arran became Regent of Scotland on the death of his kinsman, James V, in 1542.

He was next in line to throne to the six-day-old Mary Queen of Scots.

Arran was soon locked in a power struggle with the infant queen’s formidable mother, Mary of Guise.

His visits to Mary’s base at Stirling Castle – where the queen was kept safe – were often tense affairs.

Arran started off as a Protestant who wanted Mary to marry Prince Edward, heir to the England’s Henry VIII.

He then switched to the pro-French camp, converted to Catholicism and agreed that Mary should wed the son of the French king.

He later switched back again to the Protestant camp and tried to have Mary marry his own son.