Sir David Lindsay of the Mount 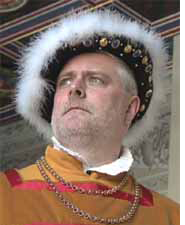 His royal service began under James IV and was later effectively the surrogate father to James V.

Sir David rose to become senior herald and Lyon King of Arms of all Scotland.

He oversaw behaviour at court and organised great state occasions like the coronation of Mary Queen of Scots at Stirling Castle.

He would have stood out in his tabard embroidered with royal coat of arms of Scotland; the Lion Rampant.

Sir David Lindsay compiled Scotland’s first book of coats of arms, drawing them himself, and the work remains an important source of reference.