The Royal Palace
The Great Kitchens

This elegant chapel was built in just seven months on the orders of James VI who wanted somewhere suitable for the baptism of his son and heir Prince Henry.

Dating from 1593-4 it was one of the first Protestant kirks in Scotland and also the last royal building at the castle.

In 1603 the Union of the Crowns saw James head south to rule from England and in 1625 he was succeeded by his surviving younger son Charles I.

Visitors today can see a handsome frieze which was painted by Valentine Jenkin in 1628 in the expectation of a coronation visit to Scotland by the new king. 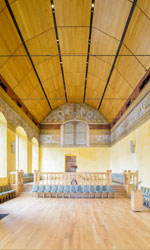 Situated in the Inner Close