The Museum is currently closed.

The links between Stirling Castle and the Argyll and Sutherland Highlanders reach back through 200 years of distinguished service.

The castle is proud to host their regimental museum where visitors can see exhibits and memorabilia from conflicts all round the world. Among them is Drummer Kennedy’s drum which saved his life during the Boer War, when it deflected a bullet.

There are reminders of many other conflicts, including the First World War, in which the regiment suffered many casualties. The museum also has many paintings and objects of interest such as the magnificent silverware which was presented in honour of the regiment’s involvement in the Boer War in South Africa. The collection includes portraits of two colonels-in-chief – Princess Louise, the daughter of Queen Victoria, and Her Majesty the Queen, who became colonel-in-chief in 1947, on her 21st birthday. 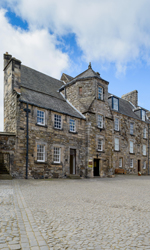 Located in the top square