The Stirling Heads are one of Scotland’s great art treasures – metre-wide 16th-century oak medallions carved with images of kings, queens, nobles, Roman emperors and characters from the Bible and Classical mythology.

They decorated palace ceilings until a collapse in 1777 after which they were dispersed.

Most of the survivors have now been brought back together and are the centrepiece of the magnificent Image-makers for the King exhibition on the upper floor of the palace. 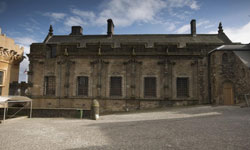 Located within the Royal Palace