The Castle exhibition is open. Access is restricted to groups of 4 at a time, a member of staff will be present to advise.

Revealing the castle’s story from its earliest times to the present day and exploring four key themes: 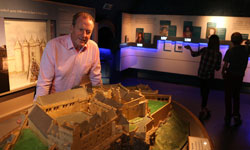 The exhibition is housed in vaults accessed via the Queen Anne Garden. Known as casemates, they were built as part of the castle’s massive Outer Defences in 1708–14.