This magnificent banqueting hall is the largest of its kind ever built in Scotland and was used for feasts, dances and pageants.

Completed for James IV in 1503 it has four pairs of tall windows at the dais end, where the king and queen sat, and was heated by five large fireplaces.

There are galleries for minstrels and trumpeters.

In 1594 James VI held a banquet in the hall for the baptism of his son Prince Henry. It was so lavish that the fish course was served from an enormous model wooden ship complete with firing cannons.

The exterior walls are a distinctive colour, rendered in Royal Gold harling, as they would have been in the 1500s. 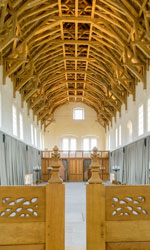 Located at the Inner Close, next to the Chapel Royal