The Great Hall
The Chapel Royal

Step into the palace of James V and be transported into the rich world of Scotland’s royalty in the 1500s.

Splendidly decorated and furnished, it recalls the years when it was the childhood home of Mary Queen of Scots.

Costumed interpreters set the scene and talk to visitors about the palace and the intrigues which took place within its walls.

The palace is one of the best-preserved Renaissance buildings in the UK and has been refurbished to look as it might have done around 1540s.

The royal chambers include the magnificent rooms where nobles and courtiers met their monarch and the bedrooms where the royals retired with their closest companions.

They are also home to brightly-painted replicas of the Stirling Heads and the breathtaking Hunt of the Unicorn tapestries which took many years to weave at a cost of £2 million. 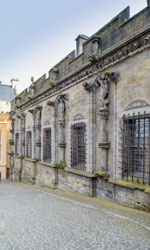 Located at the Inner Close