Intricate and beautiful this set of seven hand-woven tapestries hangs on the walls of the Queen’s Inner Hall in the royal palace.

They are closely based on the Hunt of the Unicorn series which were created in the Low Countries in the early 1500s and are now in the Metropolitan Museum of New York at its Cloisters Museum.

Only the very wealthiest of people could afford tapestries and James V had a large collection, including two sets which showed unicorns.

The huge new tapestries were created in a £2 million project which took 13 years to complete and allow visitors to recapture the atmosphere of Scotland’s royal court.

The castle’s Weaving the Unicorn exhibition tells the story of the project. 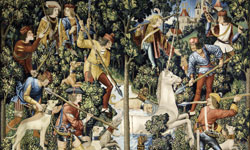 Located within the Royal Palace, in the Queen's Inner Hall